Summary:
Mia joins the party under dubious measures! Not only that, roads are starting to be established, shortening the amount of time it takes to travel to Mt. Rendon! The party is now able to get there by late afternoon.

Delving back to the spot where they found the throne, the party investigates that area. Mia touches a glowing purple God's Eye, gaining apocalyptic visions of the past and turning on the party, but the other two manage to pacify her. Pressing on, the party finds a massive hall. They start to investigate alcoves, but have to hide from a strange creature patrolling the halls. Once it leaves, they're beset by hostile spiders! Firion nearly dies to their bite, and the party decides it prudent to retreat to a safe place and recuperate, holding out in a closet. After about an hour, they leave, only to hear breathing behind them... 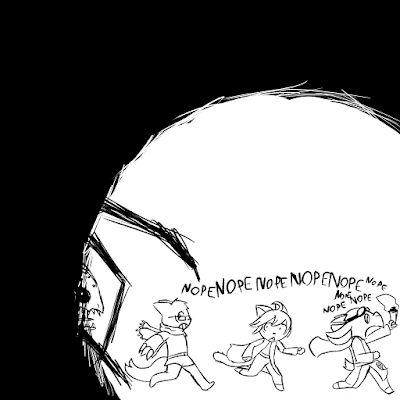 The party decides they had enough adventure for one day, and retreat back to the cave entrance to make camp.

Rumors:
-Odd cultists are gathering in the nearby forest
-A hole has opened up in a large oak tree, with a lot of strange things within
-There's a strange bottle being sold with a sandy coastal beach trapped inside
-A few adventurers are planning on raiding a cloud giant's castle for treasure

My Thoughts: Invokers with WWN's sleep spell are extremely potent. I'm really happy with how the chase at the end turned out! I really hope the players still want to explore more, though they're getting dangerously close to starting on level 2. I'll have to prepare more statblocks and token art...

Who Is This Chucklehead?

Emmet
Some dumb furry who is way too into OSR games.